The Shootouts Virtual Interview and Performance

The Shootouts - Everything I Know (Official Music Video)

The Shootouts - Everything I Know (Official Music Video)

The Shootouts are known for their energetic blend of honky-tonk, Americana, and traditional country. After releasing their acclaimed 2019 debut Quick Draw, the band charted Top 50 on Americana radio and in 2020, were nominated for an Ameripolitan Music Award for “Best Honky-Tonk Group.” They have shared the stage with luminaries Marty Stuart, Jim Lauderdale, the Nitty Gritty Dirt Band, Radney Foster, Sheryl Crow, and many more. Produced by Grammy-nominee and BR549 founder Chuck Mead, their new album Bullseye ranges from catchy pedal steel-filled numbers  (“Everything I Know”) to two-step worthy tunes (“Here Come The Blues”) to never before recorded fan live favorites (“Rattlesnake Whiskey” and “Saturday Night Town”). Set for release on April 3oth, 2021, Bullseye has been praised by a range of outlets including Rolling Stone Country, American Songwriter, Wide Open Country, The Boot, and The Bluegrass Situation, amongst others; the album recently debuted Top 30 on Americana radio charts. 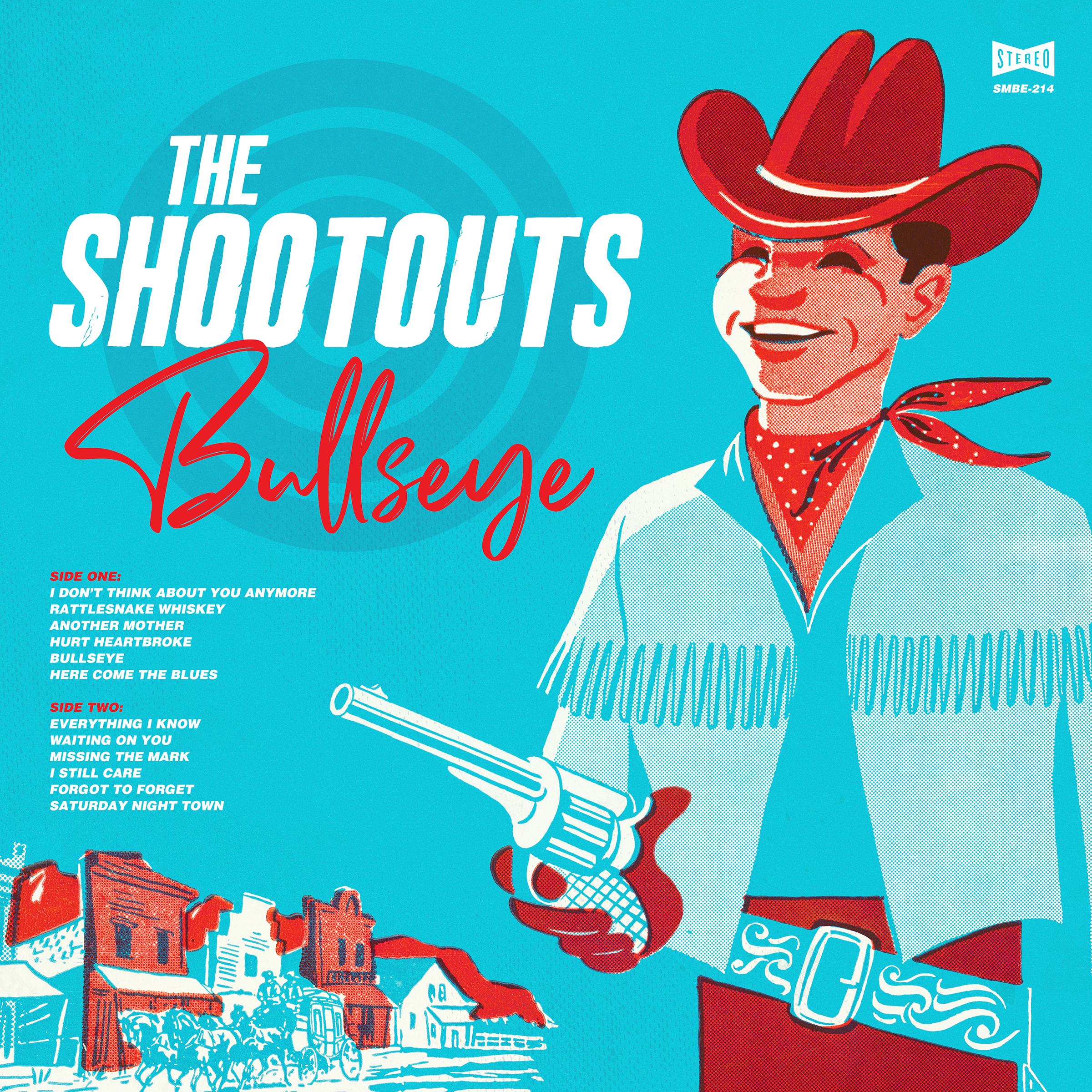 Two years after releasing their energetic debut, Quick Draw, The Shootouts are prepared to hit the mark again with their sophomore album, Bullseye, set for release on April 30, 2021via Soundly Music. The Shootouts’ deep love of traditional country music forms the bedrock of their signature sound. Lead singer Ryan Humbert grew up surrounded by the genre, listening to its songs with his parents and grandfather. Classic country, bluegrass, and gospel songs were among the first that he learned to play on the guitar. Similarly, vocalist Emily Bates spent her younger years singing harmony with her dad in their old pickup truck and eventually became a member of a bluegrass band in college. And while lead guitarist Brian Poston had been in a wide array of bands throughout his early days, he was mostly drawn to the flashy guitar styles of western swing. The roots of these band members have since grown into the unique blend that makeup The Shootouts–equal parts vintage Nashville, Texas swing, and Bakersfield bravado. Despite their steadfast devotion, the band actually formed by accident. When Humbert met Poston, the two bonded over their mutual love for all things classic country. After toying with the idea of starting a traditional country band for nearly a year, they finally played their first show in October of 2015. That first performance hit Humbert like a bolt of lightning. “Starting The Shootouts finally allowed me to follow my heart to the music that I truly love. I had been holding that back for a long while,” Humbert said. “Onstage during that first show, I finally felt at home.”Released in May of 2019, Quick Draw drew rave reviews, landing in the Americana radio album chart Top 50 for over nine weeks, and garnering the band anominationforHonky-Tonk Group of The Year at the 2020 Ameripolitan Awards. Along the way, The Shootouts performed with Americana heavy-hitters The Nitty Gritty Dirt Band, Jim Lauderdale, Sheryl Crow, Radney Foster, Robbie Fulks, Lake Street Dive, and Marty Stuart & His Fabulous Superlatives. Produced by former BR549 lead singer Chuck Mead, Bullseye shows The Shootouts mining their roots and expanding the territory they explored with Quick Draw. The songs invoke a wide array of country music’s most important contributors, lassoing the band’s classic influences and bringing them straight into the present.“I first became aware of the Shootouts when I met their leader, Ryan Humbert, in the summer of 2019,” Mead said. “He gave me a copy of their record, Quick Draw, and I immediately understood what they were about--a modern honky-tonk sound firmly rooted in tradition. When Ryan and I ran into each other again that year at Americana fest, the subject came up of me producing a record for them. I’m really glad that it actually happened.” When they scheduled March 2020 recording dates, Mead said they had no idea that a tornado would rip down his street in East Nashville three days before starting, or that a worldwide pandemic was about to really kick in while they were in the studio.“In the face of all that, these folks came into the studio with good humor and tenacity and proceeded to kick major ass,” Mead said.“The final result isBullseye--a collection of top-notch, modern honky-tonk music that is rooted not only in great tradition but in the here and now. Great songs. Great picking. Great singing. Bullseye gives it all to you. What more can you ask for?”Mead’sinfluence is unmistakably felt on every track. Just as his own band created a renewed interest in honky-tonk and western swing during the mid-1990s, Meades surely passing the torch to the Shootoutsin the 2020s.

Bullseye carries the clear inspiration of the songsHumbertgrew up listening to, while also shaping and polishing his own individual talent. There’s a mournful twinge in Humbert’s vocals on “I Still Care” that echoes 1950s vocalists like Marty Robbins and Ray Price. The title track’s jaunty western swing, written by Poston, would be right at home in a 1940s bandstand with Bob Wills at the helm. “Here Come the Blues,” which features Mead on harmony vocals, could be an outtake from a lost Buck Owens album. But despite its homage to country music’s luminaries, Bullseye is far from derivative. On “Everything I know,” Humbert invokes his talent for crafting catchy hooks as the band walks closely with the music that shaped him. The song could have been a hit for Dwight Yoakam during the country music resurgence of the 1990s, while also subtly honoring longtime favorites, Roy Orbison random Petty. While Bullseye is packed with rollicking barnburners that are just flat-out fun, some of its finest moments come from songs that evoke the heartfelt authenticity that has always been at the core of country music.“Another Mother,” not only evokes this sense of emotion but also celebrates one of the sources of Humbert's passion for country music: his mother, who passed away unexpectedly in 2018. The lyrics are a moving, honest reflection on her impact, while also challenging listeners to never take family relationships for granted.“Forgot to forget,” written by longtime Shootouts sideman Al Moss, is a classic “tear in my beer” country breakup song, with sweeping pedal steel and rich Hammond organ emphasizing the heartbreaking lyrics. The album also features two songs, “Rattlesnake Whiskey” and “Saturday Night Town,” that have been Shootouts fan favorites, finally making their way from the stage to an official album release. Alongside the sweet blend of Humbert and Bates’ voices, the album showcases Poston’s phenomenal guitar work and the airtight rhythm section of bassist Ryan McDermott and drummer Dylan Gomez. Bullseye also features special guest “hired guns” Al Moss on pedal steel guitar and acoustic guitar, Mead on harmony vocals and acoustic guitar, Renae Truex on fiddle, and Micah Hulscher (Margo Price) on Hammond organ and piano. Most of all, The Shootouts mission with Bullseye was simply to create an album that puts a smile on listeners’ faces--music that helps them escape from the difficult times they’ve recently faced.“For everyone’s sake, this needed to be a fun record,” Humbert said. “We’re living through a time where people are suddenly out of work, have lost loved ones, and have been experiencing unimaginable stress on a daily basis. Even if it’s just for 30 minutes, we want them to take a break, crank it up, and enjoy themselves.”For more information, visit www.shootoutsmusic.com.